I'm certain I've said over time how different my two boys are! I know that people say no two children are the same, but my two boys are so far from each other its amazing!

Jack is 9 so he's the eldest and he's quiet and lacks confidence (this is so stressful as he's not 'into' trying something new so not that adventurous) we're also getting to the stage of 'attitude' so we have that rearing its ugly head on occasion too
He loves to draw and paint and of course loves his xbox games, thankfully he loves to play outdoors, loves to help cook dinners and bake, still loves cuddles from Mummy which I think I'd force on him anyways

Riley is 4 so he's the youngest and he's very loud (there is no remote to turn him down, shouts to talk at you - yes his hearings been checked and its super duper perfect), stressy, a screamer, doesnt listen, stressy (i've said it twice I know but its well deserved) has too much confidence and does not stop from morning to night
He also loves to do role play, loves his 'play' food, loves to draw Mummy on his drawing board, thrives on been outdoors

Why am I sharing all this, well, over the weekend Pap bought them a car to paint each and it just summed up the boys totally.

Jack carefully opened the box, took it out, looked at it and put it to one side thinking about how to paint it - he then went back to it in the evening once Riley was in bed and it was quieter and spent time painting

Riley ripped the box open and within about 4 mins, which included the box ripping, he announced he had finished and ran outside to play, coming back to check on us at regular intervals and to show off his new car 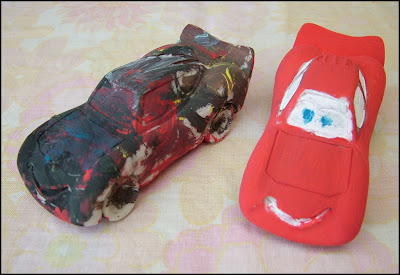 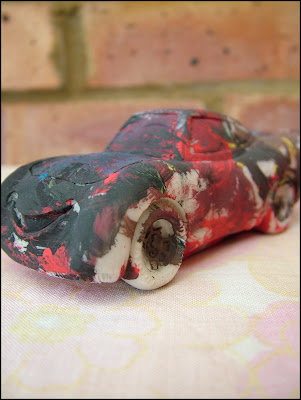 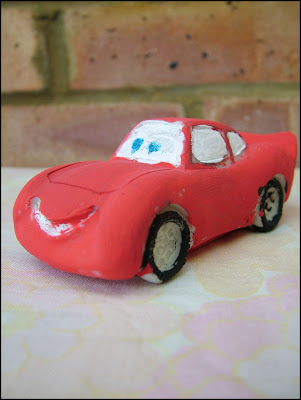 Would you agree now that these two cars resemble my boys :)